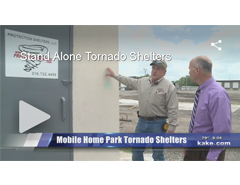 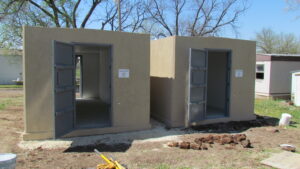 El Dorado, Kan. — When there was threat of severe weather, Rhonda Lassley says she used to start calling around to find the nearest available storm shelter.

Lassley and her husband Jerry are residents of the Country Side Mobile Home Park in El Dorado. It’s an old park and the former tornado shelter collapsed a few years ago.

“You’ve got to keep people safe,” Payne said. “They’re renting the property from you.”

Paine says the shelters are designed to withstand an EF-5 tornado.

“I don’t think we were required to have one, but our insurance company sure did want us to have one,” he said.

And residents like Lassley are glad to have them nearby. “It’ll be great because it’ll take me about two seconds to get over there with my grandson.”

The shelters are built in Wichita by Protection Shelters on South West Street, then transported to the site.

He says there’s a shelter for everyone. Some are community-sized, like the ones at the El Dorado mobile home park, which are able to hold 80 people.

But Zogleman says the company builds and sells small shelters to fit in a home garage, big enough for a family and pets or shelters that go in the ground.

Paine said the two shelters for the Country Side Park in El Dorado cost $76,000, but, he said, “Expense versus liability issue, you can’t put a price on that.”

Leave Us a Review

Our Promise to You